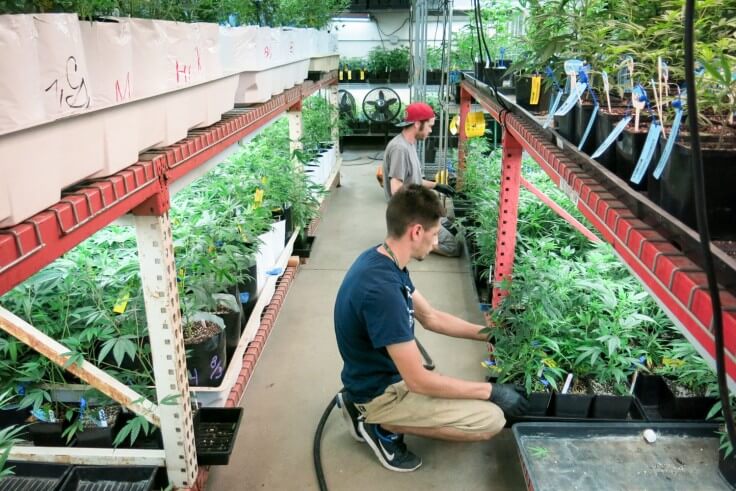 As Denver’s marijuana industry grows, so does its power needs. CPR News has obtained new data from Denver’s Department of Public Health and Environment that shows the energy-hungry plants soak up nearly 4 percent of the city’s total electricity use.

“It’s significant,” said Emily Backus, sustainability advisor for the department. Marijuana’s share of the energy pie is “growing overall at a much faster rate than the overall energy use in the city,” which has increased 1 to 2 percent in recent years.

There’s good news in the data: the amount of energy used per pound of marijuana grown is on the decline. The challenge is that the growing demand for marijuana is prompting facilities to produce more and more plants.

“It actually means that they’re becoming more efficient in their facilities,” she said, and yet the energy use trajectory continues to plot upward for the industry. 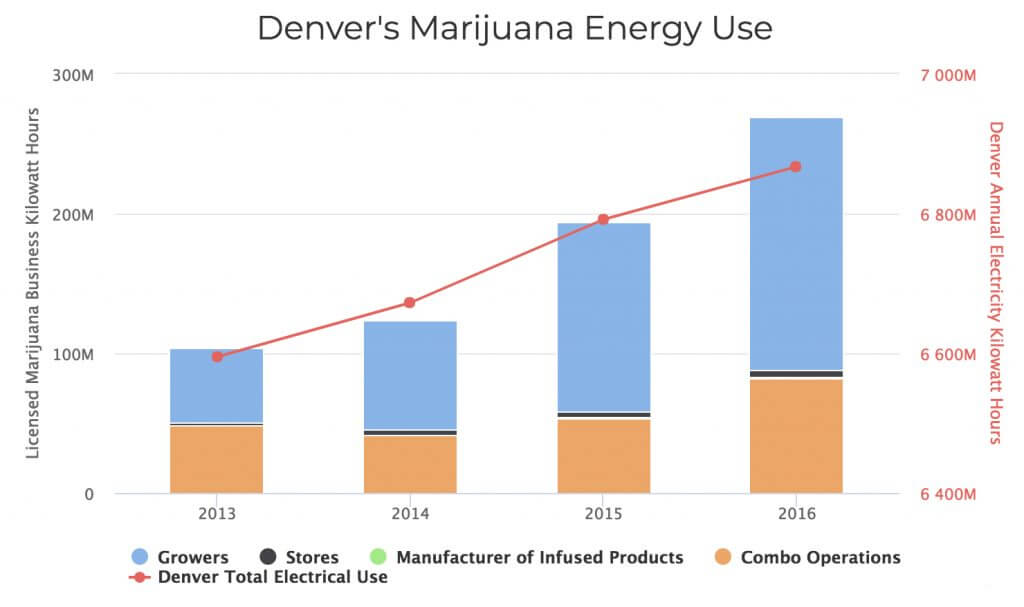 The marijuana industry went from 1.5 percent of overall Denver electricity use in 2012 to nearly 4 percent in 2016. Source: City and County of Denver, Xcel Energy. Credit: Jim Hill / CPR News

The majority of the city’s marijuana plants are grown indoors. The industry has traditionally used energy-intensive lights to maximize yields. But city officials are encouraging more sustainable growing practices that involve LED lights and fine-tuning cooling systems to use less electricity. The city started a working group to discuss sustainable cannabis cultivation, and even released a report explaining the best ways for the industry to save on lighting and cooling.

Businesses like Colorado Harvest Company are taking note. The company said it spends about $13,000 a month on electricity for one of its two grow facilities. Colorado Harvest experimented with LED lights for the vegetative phase of plants this summer. CEO Tim Cullen said the company is slowly transitioning traditional fluorescent lights to LEDs in one of his grow rooms.

More broadly, marijuana grows face a lot of economic pressures. That could mean the upward trajectory of energy use will continue to tick upward for several more years before it flattens, and eventually decreases. As the price per pound of marijuana steadily decreases, margins will tighten for growers even as demand for recreational marijuana is on the rise. Overall, production increased in Colorado 23 percent in 2017 compared to the previous year.

As the industry matures, so does the available data. Denver’s data release is one step. The Oregon-based Resource Innovation Institute is on a mission to collect energy use data for individual grows across the country. Executive director Derek Smith envisions a future where indoor marijuana grows can compare themselves at a state or regional level.

“There’s a long ramp up phase to getting a facility to an optimized production level,” Smith said.

The nonprofit is currently developing an energy-use benchmarking tool that compares cannabis growers and tells them how to become more efficient.

In the coming decades, many marijuana industry insiders, like Colorado Harvest Company’s Tim Cullen, expect marijuana grows to look more and more like traditional agriculture. Dark warehouses will make way for sunny greenhouses and outdoor farming operations. This is starting to happen in Pueblo, and a few greenhouses have taken root in Denver.

“I think this will be a short 10-20 year period in Colorado’s cannabis history that changes in the future as marijuana is more socially accepted and federally accepted, and production methods are allowed to be more agricultural and less clandestine,” Cullen said.

Snoop Dogg is coming to Montreal to talk about weed. Plus: Who Am I (What’s My Name)?

Blockchain could be a game changer for legal marijuana