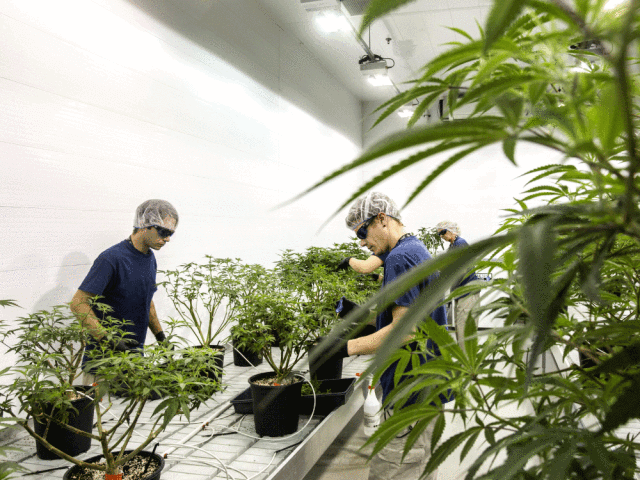 Around once a month, an armoured truck pulls away from a loading dock at the old Hershey Co.’s chocolate factory in Smiths Falls, Ont., carrying boxes packed with dozens of kilograms of marijuana destined for Germany.

Bumping across the roads south of Ottawa, the truck heads to an undisclosed airport, where the product is stored in a secure depot — alongside other sensitive items such as gold, cash and firearms — before crossing the Atlantic on a direct cargo flight.

Touching down in Germany, the crates are placed in another armoured vehicle and shuttled to a nondescript building in an industrial park south of Heidelberg, where the marijuana is processed, packaged and shipped around the country.

It’s a scene that could easily be in a Netflix narco-drama, but it’s real, all above board and carefully monitored by both Health Canada and Germany’s Federal Ministry of Health.

The product is transported in airtight containers, where temperatures are closely watched and kept below 25 C. Respectable German citizens can walk to their local pharmacy and buy Ontario bud in neat white bottles. The German government will even foot most of the bill.

“We don’t have to find guys in Florida with a little Cessna anymore,” jokes Pierre Debs, managing director of Spektrum Cannabis GmbH, a subsidiary of Smith Falls-based Canopy Growth Corp., over the phone from Germany.

In Canada, much of the excitement around the cannabis industry centres on the upcoming legalization of recreational use. For a handful of well-capitalized and experienced companies, however, Canada is only the start. The real prize is becoming the world’s premier medical marijuana dealer.

“All eyes are on Canada right now, not only for what’s coming (with recreational legalization), but also because Canada has basically defined the standards on how to do a medical cannabis industry,” said Debs, who expects to be moving up to 200 kilograms of dried Canadian cannabis flower monthly into Germany by the end of 2018, up from about 150 kilograms currently.

The rules for medical cannabis around the world are changing fast. Fewer than a dozen countries have legalized medicinal cannabis at the federal level, but as of last year that includes major markets such as Germany, Australia and Mexico, with many others considering legislative change.

Prohibition Partners, a U.K.-based cannabis industry consultancy, estimates that the European medical market alone could reach 35.7 billion euros in five years; add in recreational legalization, admittedly a more distant prospect, and the European market could be worth up to 56 billion euros.

Over the long term, as countries in Europe and elsewhere develop their own medical marijuana systems, it’s likely that they’ll favour domestic cultivation over imports, said Stephen Murphy, managing director of Prohibition Partners. But Canadian companies, flush with cash and expertise, have a rare window of opportunity over the next several years to tap these underdeveloped markets and make themselves indispensable.

“They need to position themselves very much on the ground in those markets if they want to play long term,” Murphy said. “They can’t just rely on imports, they have to actively seek out those international opportunities.”

Some 800 kilometers north of its German distribution hub, the company’s Danish subsidiary is converting an orchid greenhouse in the central city of Odense into a cannabis facility capable of producing enough marijuana to serve between 40,000 and 60,000 European medical patients, according to the company.

Across the Atlantic in Jamaica, Canopy is building eight greenhouses in a small town an hour’s drive east of Kingston. The facility is expected to produce 6,000 kilograms of cannabis a year for the Jamaican market and for export to other Caribbean countries.

“If you look at the way we’ve spread across the country, in Canada, there’s a little bit of a hint in there as to the international side of things,” said Canopy spokesperson Jordan Sinclair, referring to the current and planned expansion of production facilities in different provincial markets such as Ontario, British Columbia, Saskatchewan and Newfoundland and Labrador.

Canopy is hardly the only Canadian player looking abroad. Aurora Cannabis Inc. acquired German pharmaceutical wholesaler and importer Pedanios GmbH in May, shortly after the German government legalized medical marijuana and permitted patients to claim cannabis on their health insurance. It sold $2.5-million worth of dried cannabis in Germany in the second quarter of the 2018 fiscal year, more than double the amount from the previous quarter and accounting for more than 20 per cent of the company’s overall revenue.

Like Canopy, Aurora is also redeveloping a greenhouse in Odense and plans to turn the facility, called Aurora Nordic, into a million-square-foot European cannabis-growing behemoth.

B.C.-based Tilray, a private company, has a production facility in Portugal and distribution deals in several other European countries. Aphria Inc., a relatively late mover internationally, recently cut an $826-million deal to acquire little-known Nuuvera Inc., largely because of that company’s international assets, which includes one of only seven Italian import licenses.

“When you step back and look at sheer numbers and population … it is unrealistic to believe that (Canada) would be more than 25 per cent (of Cronos’ business), once we go over three years,” said Mike Gorenstein, Cronos’ chief executive.

For these companies, and a handful of others, global expansion is being fuelled by a fortuitous set of circumstances.

For one, expectations about the size of Canada’s domestic recreational market have allowed them to raise significant amounts of capital — more than $1 billion in January alone.

At the same time, competition from well-established U.S. players was effectively eliminated in early January by the U.S. federal government’s decision to repeal the Barack Obama-era Cole Memorandum, which had reduced the federal government’s enforcement of anti-cannabis laws.

“It’s not dissimilar to what you saw in gambling,” said Nuuvera’s chief executive, Lorne Abony. “By virtue of the fact that gambling online was federally illegal in the United States, there were not many American players. I think that’s one of the reasons that capital is forming in Canada.”

“They’ve gone through the regulations in Canada, they’ve learned how to grow in Canada, they’ve worked on these strains on the medical side that work in Canada, they’ve got good expertise in oils, they’re compliant with GMP (pharmaceutical manufacturing standards), so this will position them exceptionally well in markets that are just developing,” McLeish said.

Those, however, aren’t the only reasons that Canadian companies are looking internationally, even as the domestic recreational market looks set to consume more cannabis than they can produce. There’s also the lucrative question of price.

“If we look at dried bud or dried flower, the landed price in Germany is probably anywhere from $10 to $12. Longer term in Canada, you’ll be selling it wholesale for … probably around $5 or less than $5 a gram,” McLeish said. “Germany is eventually going to want 100 per cent cultivation within their country, but as the demand starts to increase and there’s a lack of supply, it gives these companies in the early years the ability to have a market where the pricing for the product will be better than it is in Canada.”

“There’s so many countries that still have to come online, and it’s hard to say what Germany and Australia and some of these countries in the EU might do in terms of starting to give favours to their own domestic players,” he said.

A lot also depends on how readily cannabis is adopted by the medical community. As Aphria’s chief executive Vic Neufeld explained to analysts and investors on a call following the acquisition of Nuuvera, expansion into countries such as Argentina depends on how many illnesses doctors are legally allowed to prescribe cannabis for.

“Allowing only (cannabis) oil to service epileptic seizure control, there’s no good business case that allows us to do what we really want to do long term,” Neufeld said. “I threw out a number to the (Argentinian) minister of health several months ago: you bring me five or six approved chronic illnesses that you will allow the medical community to script and allow the pharmacy chains within the country to sell to patients, and I will build my greenhouse campus in one of your states.”

Ultimately, cannabis still isn’t an easy product to move across borders, even as acceptance of the drug improves.

Health Canada has to greenlight every single shipment of finished product, and only companies whose facilities comply with pharmaceutical-grade Good Manufacturing Practice standards are allowed to sell into Europe and Australia.

There are also logistical hurdles. For example, if you’re flying a crate of cannabis to Australia, the plane can’t touch down in Singapore, a country with harsh anti-drug laws. Throw in the fact you’re working with living plants and the process becomes a logistical nightmare.

In the fall, Canopy ran into reams of red tape when shipping plants from Canada to a state-run lab in Victoria State, Australia. It took months to prepare and stabilize the plants in Canada before getting the Canadian Food Inspection Agency to examine and certify each individual plant, Sinclair said.

Once the plants arrived in Australia, they were quarantined for another three months in a federal facility.

But despite all these potential issues and the pummelling weed company stocks took in January, there’s still a good chance that the Johnson & Johnson of global cannabis will have a Canadian postal code.

“It’s not a slam dunk by any means,” Canaccord’s Bottomley said. “But if I had to handicap and pick my favourite horses right now, I’d bet on lot of these Canadian names to be large players down the road.”

Canada’s data scientists want to know: How much do you pay for marijuana?

A day aboard a ‘cannabus’: San Diego enjoys effects of marijuana tourism