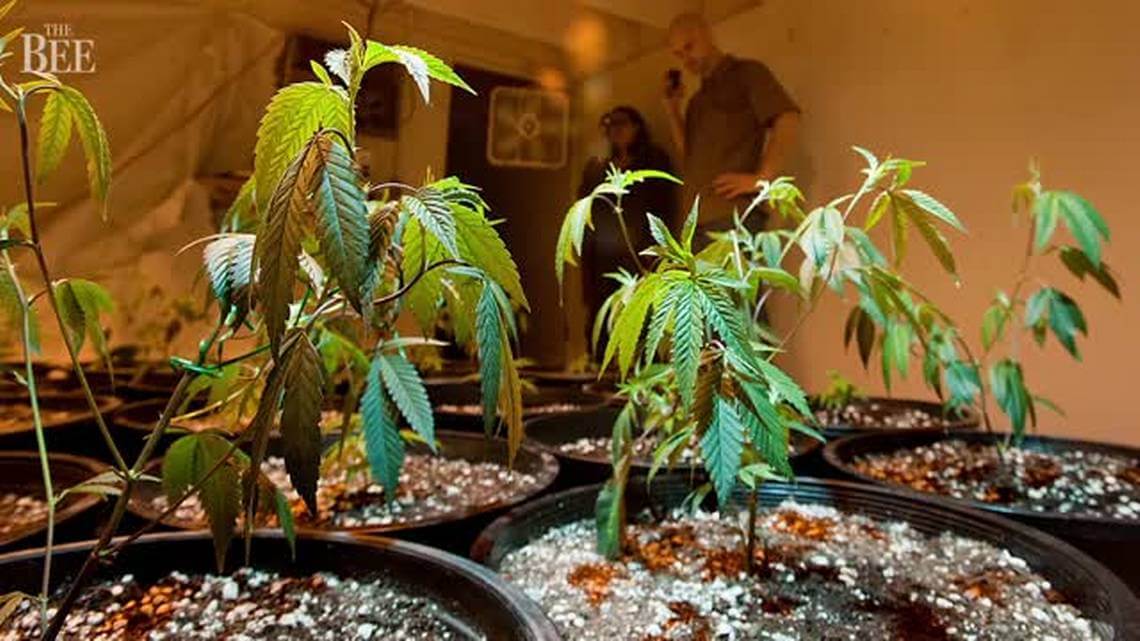 David Deardorff has heard endless pleas for help from gardeners. As a longtime horticulturist and plant pathologist, he helps both experienced and novice growers figure out what’s wrong with their plants.

Lately, he’s turned his attention from tomatoes and roses to an annual plant shrouded in mystery and controversy: marijuana.

Deardorff and Kathryn Wadsworth, his wife and co-author, produced what’s believed to be the first mainstream problem-solving gardening book for cannabis growers, “What’s Wrong With My Marijuana Plant?” (Ten Speed Press, 192 pages, $19.99). It’s the fifth in the couple’s award-winning, photo-packed series of   “What Wrong With My Plant?” books.

With legalization in California and other states, their new book has rapidly become a best-seller. Based in Washington where Deardorff taught for many years, the couple travel the country, giving lectures to pot growers on how to produce better, healthier plants without chemical pesticides, fungicides or fertilizers. Last week, they were in Berkeley to talk to California growers.

Marijuana is now legal in some form in 30 states plus the District of Columbia. Because cannabis is still outlawed on the federal level, universities have shied away from research of cannabis as a crop. The usual sources of how-to information for gardeners and farmers aren’t available, Deardorff said.

“Anyone who gets federal funding won’t touch it,” Deardorff said. “I’ve been teaching master gardeners (about plant pathology) for 20 years, but they can’t officially buy our book as a resource. It’s like talking about wine grapes during prohibition.”

Deardorff, 75, and Wadsworth, 68, are devoted organic gardeners. All five of their gardening books are dedicated to organic methods without the use of chemical pesticides or fertilizers.

“We’ve observed numerous instances in online marijuana forums where a grower has a problem, posts a photo, and asks for help,” he explained. “Many of the responses from other growers are misleading at best and totally wrong at worst. There is an enormous amount of misinformation on the web that is a disservice to this burgeoning industry.”

The couple do not grow cannabis themselves. Deardorff said he experimented with growing it briefly in 1971 and 1973. Most of the information for their book came from longtime medical marijuana growers as well as university research overseas.

“All marijuana is pretty easy to grow; that’s why they call it ‘weed,’ ” he said. “It’s a vigorous plant and generally very healthy.”

The couple compared marijuana to roses or citrus in terms of its needs, growing conditions and common maladies. Like any plant, cannabis can develop problems, either from improper growing conditions or pests and disease. Cannabis grown indoors (a mandate in many cities, including Sacramento) tends to have more issues than if grown outside.

Recent news reports linked illegal marijuana grows to the death of spotted owls in California due to the use of rodenticides to kill rats or mice, which were eaten by the birds. But Deardorff said rodents are not a cannabis pest and there’s no reason to use such chemicals to protect plants.

“All the growers I’ve talked to, not one person mentioned rats (as a problem),” he said. “I heard a lot about powdery mildew and gray mold.”

Like other plant families, not all cannabis is the same, Deardorff noted. Four species plus hybrids are grown commercially and have their own distinctive qualities reflecting their origins. Native to Mexico, heat-loving Cannabis sativa has skinny leaflets and a tall rangy look; it can grow 8 to 15 feet tall. Originally from high elevations in Central Asia, wide-leaved Cannabis indica prefers cooler weather and stays much shorter, under 5 feet.

Organic growing is a must for marijuana, said the authors.

“Every problem has organic solutions,” Wadsworth said. “There are many organic controls of spider mites and powdery mildew. It’s safe for the plant and the consumer.”

Added Deardorff, “It’s important to avoid synthetic pesticides for the user, the grower and the environment – particularly on any plant you are going to eat. Marijuana is ultimately going to be ingested, inhaled or absorbed into your body when you use it, whether it’s for medical or recreational purposes. If the marijuana has residues of synthetic pesticides on it, those pesticides can be transferred into your body in the smoke, or the edibles or the concentrate.

“The unfortunate consequence is that pesticide poisoning can be serious, especially for medical patients whose health is already compromised.”

Marijuana is similar to other common garden plants such as tomatoes or roses, Wadsworth said. Like any sun-loving plant, it has basic requirements. When those aren’t met, problems follow; plants drop leaves and can eventually die.

“There are more problems (when grown) indoors,” she said. “Air quality is important. You need to keep air moving and not humid; marijuana prefers it dry. It’s harder to use biological controls indoors (such as lady bugs) because it’s not the right environment.”

“The most common problems people run into are poor growing conditions; pathologists call these abiotic disorders,” Deardorff added. “These conditions include: too little light; temperatures that are too hot or too cold; insufficient water or too much water; nutrient deficiencies; and/or poor soil.”

Those conditions account for about 80 percent of all plant problems, not just in cannabis but most crops and ornamental plants.

Deardorff expects a day will come soon when marijuana is regarded like wine grapes, a crop that once was prohibited but is now accepted.

Navigating Cannabis in the Workplace in 2023: Employers and Employees in Canada

Navigating Cannabis in the Workplace in 2023: Employers and Employees in Canada